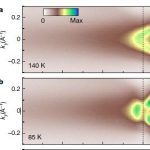 Unconventional spectral signature of Tc in a pure d-wave superconductor
In conventional superconductors, the phase transition into a zero-resistance and perfectly diamagnetic state is accompanied by a jump in the specific heat and the opening of a spectral gap1. Nature, January 2022 (link will follow) 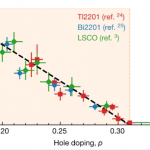 Incoherent transport across the strange-metal regime of overdoped cuprates Strange metals possess highly unconventional electrical properties, such as a linear-in-temperature resistivity1,2,3,4,5,6, an inverse Hall angle that varies as temperature squared7,8,9 and a linear-in-field magnetoresistance10,11,12,13. Identifying the origin of these collective anomalies …  Nature, July 2021

Incoherent strange metal sharply bounded by a critical doping in Bi2212  In normal metals, macroscopic properties are understood using the concept of quasiparticles. In the cuprate high-temperature superconductors, the metallic state above the highest transition temperature is anomalous and is known as the “strange metal.” We studied this state using angle-resolved photoemission spectroscopy. Science, Nov. 2019

Rapid change of superconductivity and electron-phonon coupling through critical doping in Bi-2212  More than 30 years after the discovery of high-temperature superconductivity in copper oxides, its mechanism remains a mystery. Electron pairing mediated solely by lattice vibrations—phonons—is thought to be insufficient to account for the high transition temperatures. Science, Oct 2018

Charge trapping and super-Poissonian noise centres in a cuprate superconductor     The electronic properties of cuprate high-temperature superconductors in their normal state are highly two-dimensional: transport along the crystal planes is perfectly metallic, but is insulating along the perpendicular ‘c-axis’ direction. Nature Physics, Oct 2018

Quantum Thermalization and the Expansion of Atomic Clouds  The ultimate consequence of quantum many-body physics is that even the air we breathe is governed by strictly unitary time evolution. The reason that we perceive it nonetheless as a completely classical high temperature gas is due to the incapacity of our measurement machines to keep track of the dense many-body entanglement of the gas molecules. Scientific Reports, July 2017

Generalized Liquid Crystals: Giant Fluctuations and the Vestigial Chiral Order of I , O , and T Matter  The physics of nematic liquid crystals has been the subject of intensive research since the late 19th century. However, the focus of this pursuit has been centered around uniaxial and biaxial nematics associated with constituents bearing a D∞h or D2h symmetry, respectively. Phys. Rev. X, Oct. 2016

Universality of pseudogap and emergent order in lightly doped Mott insulators      High-temperature superconductivity in the cuprates emerges from doped Mott insulators1. When extra carriers are inserted into the parent state, the electrons become mobile but the strong correlations from the Mott state are thought to survive inhomogeneous electronic order, a mysterious pseudogap and, eventually, superconductivity appear.  Nature Physics, Sept 2016

From quantum matter to high-temperature superconductivity in copper oxides    The discovery of high-temperature superconductivity in the copper oxides in 1986 triggered a huge amount of innovative scientific inquiry. In the almost three decades since, much has been learned about the     novel forms of quantum matter that are exhibited in these strongly correlated electron systems. Nature Vol. 518, Feb 2015

Towards a complete theory of high Tc   Given the successes of the microscopic theory of conventional superconductors, it seems natural to expect a similar all-encompassing theory for high-temperature superconductivity. But is it the best approach? Where are we heading?  Nature physics Vol. 2, 2006

Nodal quasiparticle in pseudogapped colossal magnetoresistive manganites   A characteristic feature of the copper oxide high-temperature superconductors is the dichotomy between the electronic excitations along the nodal and antinodal directions in momentum space, generally assumed to be linked to the ‘d-wave’ symmetry of the superconducting state. Nature Vol. 438, Sep 2005

Quantum critical behaviour in a high-T-c superconductor    Quantum criticality is associated with a system composed of a nearly infinite number of interacting quantum degrees of freedom at zero temperature, and it implies that the system looks on average the same regardless of the time- and length scale on which it is observed. Nature 425, Aug 2003

Superconductivity in the fullerenes Intramolecular vibrations strongly scatter electrons near the Fermi-surface in doped fullerenes. A simple expression for the electron-phonon coupling parameters for this case is derived and evaluated by quantum-chemical calculations. The observed superconducting transition temperatures and their variation with lattice constants can be understood on this basis. To test the ideas and calculations presented here, we predict that high frequency H(g) modes acquire a width of about 20% of their frequency in superconductive fullerenes, and soften by about 5% compared to the insulating fullerenes. Science Vol. 254, Nov 1991